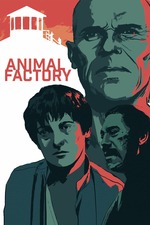 Animal Factory is a rather mundane prison drama, based partially on true events, where a young junkie is imprisoned on a minor charge but becomes a member of a hardcore prison gang, leading to violence and further incarceration.
The cast is full of good actors, but nobody really shines. Steve Buscemi does an okay job on the other side of the camera, but this material needed someone who could bring a little bit more grit to the screen.
6/10