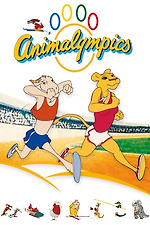 Made for television, Animalympics is an animated spoof of the Summer Olympic Games with animals from around the world competing in various athletics and sporting events.
A fun animated film with some good voice talent involved, but there's a definite bias towards the US winning all the gold medals.
The inventiveness can be admired, but the animation is very dated and it's just way too America-centric.
6/10