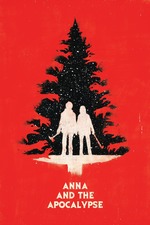 I'll be the first to admit that this isn't a film for an audience like me... the trouble is, I have no idea who it's meant to appeal to. The marketing promotes it as a Zombie Christmas Musical, which may tell you all you need to know
Perhaps it's my fault for expecting something more along the lines of a teenage version of Shaun Of The Dead, where it's more like an episode of Glee... with zombies. Unfortunately, the first song was nearly enough for me to switch off, warbled by Ella Hunt, who plays an entitled teenager going about her usual business at a school in Scotland when a plague of undead creatures attack. She sticks out like a sore thumb in this though, clearly cast for her singing ability since she's the only member of the cast not to have a Scottish accent.
Perhaps it's a film you'll enjoy if you care for the songs. I didn't. They were all far too twee and didn't fit in at all with the horror themes of the plot, and overall the entire project just thrown together by a bunch of GCSE drama students. A horrific movie, for all the wrong reasons.
4/10

Anna and the King of Siam