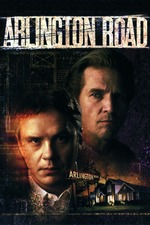 Arlington Road is a clever psychological thriller which plays on the growing paranoia of it's lead character, played with fierce intensity by Jeff Bridges.
Following the death of his wife, Michael Faraday (Bridges) grows suspicious of his new neighbours across the road, the man of the house (Tim Robbins) especially, whom he suspects of being terrorists.
He makes discoveries which seem to justify his paranoia culminating in a thrilling game of cat-and-mouse with a cynical and unexpected twist.
Both male leads deliver great performances and the sharp script makes this one of the best thrillers of its year.
7/10