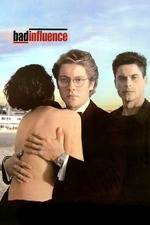 Rob Lowe is perfectly cast in this thriller, supposedly because of his bad boy reputation around the time it was made. He plays the mysterious and shady new friend of a timid office worker (Spader), who is manipulated into undertaking a different lifestyle and adopting unsavoury mannerisms.
It has enough suspense to maintain it's running time but some might say it's 'Fatal Attraction with a couple of guys', I think it's a little better than that and the sort of thing Hitchcock would make, albeit with a little more ambiguity between the relationship of the two men.
6/10