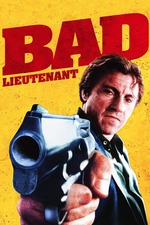 Abel Ferrera's 1992 contribution to exploitation films was met with controversy upon release, especially in Britain, where it was dubbed a "video nasty".
Harvey Keitel plays a corrupt, drug-addicted detective who uses his status to manipulate the law. Gambling heavily on baseball matches & in deep debt with gangsters, he investigates a case where a nun was raped and sees it as a chance of redemption.
Though Harvey Keitel brings an excellent performance to the screen, not one second of the film makes for a pleasant viewing experience.
6/10