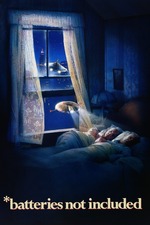 Styled *batteries not included, this is a twee fantasy about a group of elderly residents from a run-down Manhattan neighbourhood who are saved from being evicted by a group of miniture flying saucers.
This is basically a cross between E. T. & Cocoon, with some rather good visual effects, but it's all let down by a tacky screenplay. Too boring for kids, too schmaltzy for adults and too deadly for diabetics.
4/10