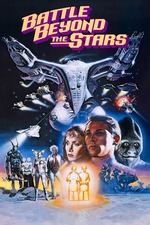 Where it's said that the original Star Wars was partially inspired by Akira Kurosawa's The Hidden Fortress, Battle Beyond The Stars is a little more obvious with its inspirations of being the Seven Samurai (The Magnificent Seven) set in space.
Richard Thomas plays a farmer who enlists the help of a group of spaceship pilots to fight against the tyrannical warlord Sador, who wants to rule over the galaxy.
Though this isn't as bad as some of the Star Wars ripoffs which came out around the same time, it really isn't very good either, looking incredibly cheap with its production values which date the film badly. It's also quite boring, especially when compared to the classic films that it's trying to imitate.
4/10