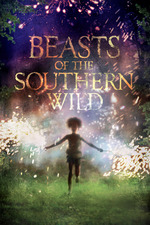 This movie saw debutante Quvenzhane Wallis become the youngest ever nominee for a Best Actress Oscar and it was an accolade quite richly deserved, her performance carries the entire film.
She plays Hushpuppy, a six-year-old girl living in a remote part of the Bayou called "The Bathtub" along with her bad-tempered father. When a storm leaves their vast homeland flooded, her father teaches her some rules of survival before he succumbs to poor health.
Aside from the great performances, this film does suffer from a rather slow-moving narrative, especially during the opening 20 minutes and would probably be most enjoyed by fans of arthouse pictures. Nevertheless, I still enjoyed it, although it's not one I'd choose to watch more than the once.
7/10