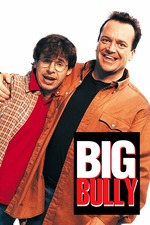 It's sad to see Rick Moranis star in such movies as Big Bully, his comedic and acting talents are more deserving than rubbish like this. However, for his co-star Tom Arnold, this is the type of obnoxious role he was suited to.
Arnold plays a former school bully returns to his spiteful thuggish ways when one of his victims returns to their old school as a teacher.
An asinine, moronic slapstick made far too long after the popularity of its two main actors had waned (if indeed Tom Arnold had any in the first place).
4/10