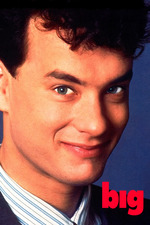 Undoubtedly Tom Hanks finest comedy performance with a brilliantly witty script with some funny and bittersweet moments.
Young Josh Baskin makes a wish on a mysterious fortune teller machine at a fair that he wishes he were big... The next morning he wakes to discover he's a thirteen-year-old in an adult body. Chased out of the family home by his mother who doesn't recognise him, he runs off to New York City and gets a job in a toy company, where he rises to an executive position because he still thinks like a child... But he still misses his family, his friends and ultimately, his childhood.
Big is an absolutely wonderful film about wanting to grow up, but more importantly the things we take for granted in our younger years and can be appreciate for different reasons regardless of the viewer's age.
Solid entertainment for kids, but also a brilliant and nostalgic film for adults to enjoy.
A highlight of 1980's cinema which has dated particularly well considering it's over thirty years old.
8/10