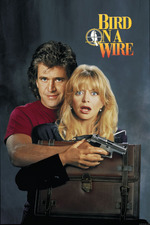 Bird on a Wire

Frenetic chase comedy about a lawyer and her ex-boyfriend who try to outrun those trying to kill them, full of the usual high jinks you'll come to expect from these types of movies.
It's been done before, it's been done since, this is barely memorable for any reason except for the moderately amusing pairing of Mel Gibson & Goldie Hawn.
5/10