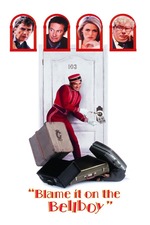 Blame It on the Bellboy

Stupid farce about a bellboy who confuses the names of similar named guests at a Venice hotel, one of whom is a hitman.
It's all very silly and only has the one joke which carries the whole movie. It simply isn't enough. Might have worked better as a 20-30 minute sketch, although at 78 minutes, at least not too much time is wasted on this nonsense. Blame it on the screenplay.
4/10

Blast from the Past

Blame It on Rio