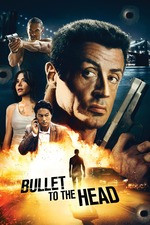 Bullet to the Head

Typical Sylvester Stallone action hokum that was released at least two decades too late.
A New Orleans hitman and a Washington detective form an alliance after their respective partners are killed by the same organisation.
It's pretty lazy stuff, which all we've seen done before and much better.
Stallone really is getting too old for this shit, and the film's only real asset is from Jason Momoa, delivering a convincingly threatening performance as the bad guy.
4/10