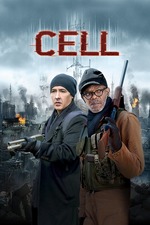 Cell may very well be the worst adaptation of a work by Stephen King, and it's all due down to the terrible execution by director Tod Williams.
Clearly the film had some sort of handsome budget in order to secure the acting talent of John Cusack & Samuel L. Jackson, but the film has the visual quality of a "mockbuster" that Asylum Films would release.
The plot sees a strange cell phone signal turn all the world's users into raging savages. This translates to the screen as yet another run-of-the-mill zombie flick.
The acting is quite poor, but there's very little that the performers could have done with a screenplay that doesn't bother any character depth. All other aspects of the filmmaking are equally bad, especially the hyper-kinetic editing style, which is clearly trying to emulate 28 Days Later. The visual effects, makeup and general sound mix are also well below par.
I can only imagine that the producers ran out of money once they'd secured the services of the lead actors, who are capable of much better work than what's on display here, even in a Stephen King adaptation, as proven in the film 1408 (qv).
3/10

The Girl Next Door