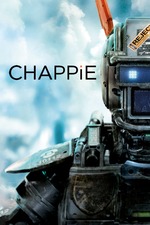 Chappie is everything that the Robocop (qv) remake should have been, not that it improves upon the 1987 original, but it's certainly better than the lacklustre 2014 version.
Like the same director's District 9, this is also based on a short film he made prior to his 2009 breakthrough. In a future Johannesburg, where the police force is made up of robotic droids, the inventor creates a programme which can make the robots more sentient and uses a scrapped unit as a guinea pig.
The robot falls into the hands of a trio of gang members who plan to use it for heists and other criminal activities. Meanwhile, within the police organisation, a corrupt technician plans for his own machine to become the new answer to law enforcement.
There's many similarities to other films, particularly Robocop, but there's also enough originality in the plot.
The final act becomes a bit silly, settling on full-blown action and the finale lacks credibility, but it's still plenty of fun.
The visual effects which bring Chappie to life is the true star, while some of the human performances feel miscast, especially Dev Patel (far too young to be the brains behind the 'bot) and Hugh Jackman, as an underwritten pantomime villain.
5/10