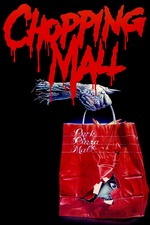 Chopping Mall is not a good film, but it does manage to be quite fun.
Originally released under the title Killbots with a longer running time, it was re-edited and released again under the title Chopping Mall, which should speak volumes that this isn't a film to be taken seriously.
Set at a suburban Los Angeles shopping mall, a group of teens become locked in at night with a group of killer security robots on the fritz, taking out the teenagers and other staff members one-by-one.
The standard of acting, dialogue and characterisation is as you'd expect. Bad, but not offensively bad.
It's all very silly, but if you're expectations aren't particularly high for this, it should quell the appetite for some low-budget schlock. The last act does seem quite rushed, with some incredibly lazy set pieces, but for the most part, it's reasonably entertaining for what it is. Retrospectively, the robots look pathetically unthreatening and the theme music is right out of a time capsule.
So bad, it's good?? Perhaps so.
5/10