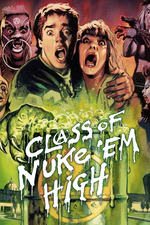 Like the majority of Troma films, you'll know whether or not this will be your thing from the title and plot alone.
A chemical waste leak affects the students of a high school and they use their new mutant powers against a group of punk bullies.
It's in the usual cheap, schlocky style of the studio, with some rather disgusting makeup effects, bad taste humour and gratuitous nudity.
It's dated incredibly poorly, and it wouldn't have looked great in 1986.
4/10