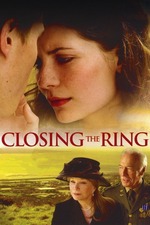 An Irish boy finds a WWII pilots wedding ring and traces the late airman's widow, setting up a story told in flashback of the two young lovers, marrying before he goes off to duty.
This romance weepie is very much in the same vein as 2004's The Notebook (qv), but feels a bit forced in moments. Some of the performances are good and Mischa Barton bares her boobies, but it's not particularly memorable, despite being well-intentioned and professionally produced and directed.
5/10