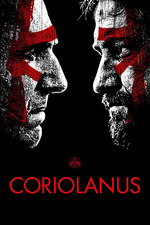 Ralph Fiennes' directorial debut is a contemporary update of William Shakespeare's tragedy of the same name, relocated to Eastern Europe so it becomes a parable of the Serbian-Bosnian war.
The plot concerns a military leader of a (fictional) country who is deposed once the conflict is over, and unites with his former enemy to fight back against those who betrayed him and reclaim the throne.
Despite some excellent performances, the update just didn't work for me, especially since no changes are made to the Shakespearian dialogue, which sounds particularly awkward when spoken by Gerard Butler.
Fiennes does a fine job behind the camera, giving the film a raw and gritty look and the production design is particularly impressive.
Admittedly, it's one of Shakespeare's plays which I didn't know a lot about prior to watching, and I may have a different point of view had I seen the play or read the original prose first.
6/10