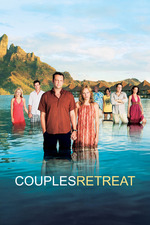 Considering some of the talent involved, you'd be forgiven for wanting much more from this bland comedy.
A professional synopsis would say that this is a film about a group of couples who go on vacation together and end up behaving badly. An honest synopsis would say it's a group of actors playing the same characters they've played in several films before and still expect to be applauded for it.
The saddest thing is that some audience members do.
4/10