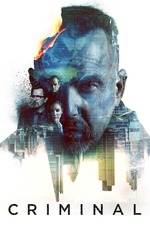 What starts off as a Bourne Identity style spy thriller wanes off into run-of-the-mill action hokum with an incredibly tedious plot.
The memories of a murdered intelligence agent are embedded into a volatile criminal so an assignment can be completed.
In short, this is Robocop without the science fiction element and gets more and more boring as the film goes on. A real shame considering its promising opening skirmish, especially since there's an incredibly talented cast on show here.
4/10

Wish You Were Here