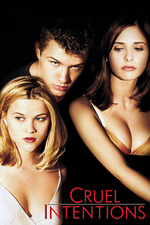 A teenage version of Dangerous Liaisons (qv), set at an American high school where two of the rich, cool kids make a bet over a young girl's virginity.
It is quite adequately done, with a couple of good performances and a rather infamous scene involving a lesbian kiss, the ending is a complete anti-climax however, and really lets the entire film down.
Two truly terrible sequels followed.
5/10