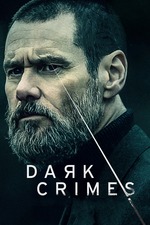 Jim Carrey is particularly miscast in this dark crime thriller where he plays a detective who investigates a series of murders set amongst the seedy world of underground sex clubs.
An American-Polish co-production, the film spent two years on the festival circuit before it was released in cinemas and it promptly bombed. In fairness, it isn't a terrible film, though it's dark subject matter would be a turnoff for many. Had the treatment been handled in a different way, perhaps as a Polish-language movie or adapted as a TV series in the same vein as True Detective, then it may have been received much better. The film's principal failure is mostly due to the lead role being played by an actor who is much better suited to less serious roles. I find it admirable that Carrey wants to expand his range, but in this particular example, it just doesn't work.
4/10