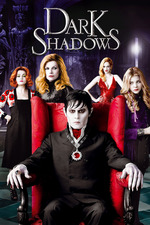 All the negative reviews will probably only be relevant to those who remember the TV programme of the 1960's. It's before my time and the only similarly-themed shows I know of were The Addams Family & The Munsters, therefore I can only critique the film on it's own merits and not on any previous incarnations.
I thought this was a better movie than most fantasy movies released in the past couple of years (Beautiful Creatures, etc) and has the gothic production design, macabre makeup and surreal visuals you'd expect from Tim Burton's direction and once again he partners with Johnny Depp who delivers a flamboyant performance as a 200 year old vampire who is resurrected from being buried alive and wants to take control once again of his family's legacy and get revenge on the witch who imprisoned him.
It's also good to see Michelle Pfeiffer in a major part again. She's looking damn fine for her age.
The movie gets a bit ridiculous in the final 15 minutes, but it was still an enjoyable watch. It's another movie stolen by Johnny Depp's acting, in a role he really sinks his teeth into.
6/10