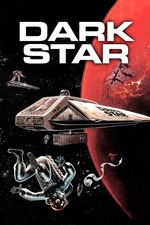 A low-budget spoof of 2001: A Space Odyssey and other sci-fi films which was initially made for a university protect but went on to huge cult success, launching the career of director John Carpenter and screenwriter Dan O'Bannon who went on to write Alien in 1979 (the plot between this film and Alien are uncannily similar).
The film has no deep storyline, mostly involving a group of slacker astronauts bored in space, but there's plenty of funny moments, especially when they become prey to the alien they're carrying abroad (which looks like a beachball with hands). A prophetic film for more to come.
6/10