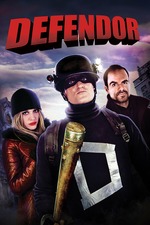 Defendor is a different spin on superhero movies not too dissimilar from Kick-Ass & Super, but also complete unique in it's own way.
Woody Harrelson plays the intentionally misspelt crime fighter, a simple man who dons his rudimentary costume to uncover police corruption and foil a kingpin's plans for both gun smuggling and human trafficking.
The film opens with Harrelson explaining the origins of his alter-ego to a psychiatrist, as his story unfolds as he is in search to bring 'Captain Industry' to justice, while both assisted and exploited by a young, drug-addicted prostitute who saves him from one of his bungled missions.
Despite the plot, this film is not a superhero movie, it merely uses it as a metaphor for dual personality and schizophrenia, with Harrelson playing both a mentally retarded man with a haunting past by day and a justice-seeking vigilante by night who becomes a symbol of courage for his local community.
The film is perfectly balanced between comedy & drama, with some hilarious and bittersweet moments. Woody Harrelson delivers a great performance, and along with the films Zombieland & The Messenger (for which he received an Oscar nomination), 2009 seemed to be a very good year for the actor.
6/10