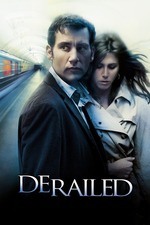 Anyone who says the plot twist is obvious is lying. The plot twist is actually so ridiculous in this film it cheapens the thrilling build up which comes before it.
Clive Owen plays a businessman who cheats on his wife, Melissa George, for a bit of naughtiness with Jennifer Aniston (silly boy). The two are attacked in their hotel room, where Aniston is raped and Owen is mugged. Since the two were engaging in an illicit affair, neither of them report the crime for risk of their spouses discovering the infidelity.
Days later, Owen is contacted by the attacker for more money in a seemingly continuous web of blackmail and deceit, until Owen gets in over his head and takes the law into his own hands, leading to the forementioned ridiculousness.
The performances hold this film together more than the flawed storyline, which is atypically what you'd be subjected to in a TV movie-of-the-week. Decent, but not great, and not to be confused with a Jean Claude Van Damme film of the same name.
5/10