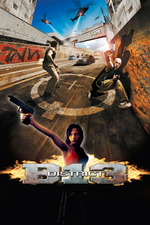 Not a sequel to District 9, in fact, this was released half a decade earlier, though the two films do have a few similarities.
Set in a future where Paris ghettos have become lawless, politically fragile areas, each have become sealed off from the rest of the country. Two men must break into District 13, the most violent of them all, for different reasons. One, to rescue his sister from the drug gang who hold her prisoner and the other, a police officer, to defuse a neutron bomb before it detonates.
Yes, it's a preposterous plot, but for an action film, it exhilarates throughout with stunningly acrobatic parkour stunt work, characters jumping off rooftops and spinning off balconies. At 85 minutes, it's a delicious bite size slice of nonsense.
7/10