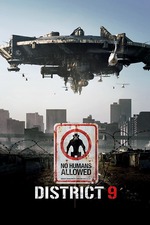 District 9 was without doubt the biggest surprise of 2009, a unique documentary-style science fiction movie which doubles up as an intelligent allegory for apartheid.
Set in Johannesburg in the near future when an alien visit leaves an entire race stranded to live in a shanty town on the edge of the city.
An operation is put into place to evict them from their slum and move them elsewhere, but some of the intergalactic residents are reluctant to leave, leading to a war between the government and the alien species.
The CGi effects are absolutely faultless and all the members of the unknown cast put in brilliant performances, especially the particularly impressive debutant Sharlto Copley.
It's a shame James Cameron's mega blockbuster Avatar was released the same year otherwise this would definitely have been the recipient of the best Visual Effects Oscar.
Lord of the Rings director Peter Jackson served as producer on this project, but all the credit belongs to debut director/writer Neill Blomkamp, adapting the script from his own 2006 short film "Alive in Jo'burg".
9/10