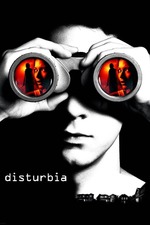 Half-arsed Rear Window remake for the MTV generation, starring Shia LaBeouf as a wheelchair-bound teenager who copes with his father's recent death by spying on neighbours & suspecting the chap next door of being a murderer.
The film falls apart in it's final act with an unrealistic, badly executed twist.
In the grand scheme of things, it's not a terrible "remake", but it simply doesn't compare to Hitchcock's suspense masterpiece.
4/10