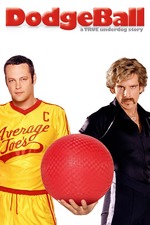 An enjoyable sports comedy which pretty much follows the same blueprint as films from the past, only with the novelty of having an unorthodox sport at the centre of its plot.
An indebted gym owner takes his ragtag Dodgeball team to the World Championships so they can compete for the prize money and save his business, while his rival also has plans to win the contest.
Though there are a few moments which will raise a smile or cause a chuckle, it's just another reworking of a tired format which has served so many other films up to this point (The Bad News Bears, Major League, Kingpin). In all honesty, it's not worth going out of your way to watch, but I wouldn't suggest dodging it entirely.
6/10