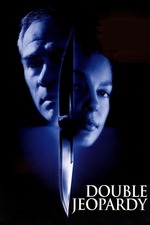 Ridiculously implausible thriller about a woman who is sentenced to prison for killing her husband, but later discovers that she has been framed and the husband faked his death so he could assimilate a new identity.
Upon her release from prison, she plans to murder him for real since a person cannot be tried for the same crime twice.
Despite the premise being quite enthralling, the film is turned into a ludicrous knock-off of The Fugitive with a female protagonist.
Despite all its shortcomings, it was a huge hit at the US box office, taking more than $100m.
5/10