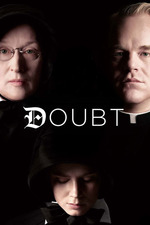 A very good screenplay gives four actors a fantastic opportunity to flex their acting muscles and they do so with aplomb.
Based on a play of the same title, the movie is incredibly set-bound and relies heavily on the dialogue between it's characters.
Meryl Streep plays a religious school's principal who suspects Philip Seymour Hoffman's priest of foul play with one of the students.
The mystery is quite open in this film and you're often wondering if Hoffman's character really is guilty of something unsavoury or if Streep's character has manipulated it out of malice and dissatisfaction with the school losing it's more traditional roots.
The ambiguity goes on and culminates in a great scene with Streep & Hoffman at each other's throats in a face off.
The two leads are absolutely brilliant, Streep's character being quite unlikeable but also evoking sympathy, while Hoffman delivers one of his best ever performances.
Amy Adams & Viola Davis are also excellent as a fellow teacher and the student's parent, respectively.
Overall, the subject matter would work best as a stage play, but as a filmed adaptation, it doesn't have too many negatives.
8/10