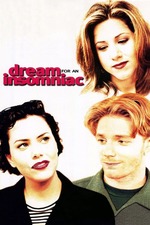 Dream for an Insomniac

Dream For An Insomniac is the directorial debut and (to-date) sole project of independent filmmaker Tiffanie DeBartolo.
Ione Skye plays Frankie, a neurotic, lovestruck insomniac who works in her uncle's coffee shop and falls for a new member of staff, an aspiring writer.
The direction has some arty flourishes, such as a black & white to colour transition when the man of her dreams comes into Frankie's life as well as a muffled recording process which gives the film a dreamy, ethereal sound.
The dialogue is the let-down, full of pseudo-intellectual soundbites and poetic quotes from other sources. Jennifer Aniston, with her usual persona, is the best-written character, as an aspiring actress who feels the need to constantly practice accents. The romance here feels contrived and there's a lack of comedy. The cast are okay, but the film as a whole is a little too pretentious.
4/10