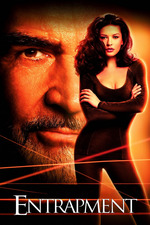 It's never a good thing when a film dates itself immediately, which this 1999 crime caper certainly does by basing a large part of its plot around New Year's Eve to the new millennium and the 'Y2K bug'.
Catherine Zeta-Jones plays an insurance investigator who teams up with master criminal Sean Connery to steal a precious artefact and then revealing plans which will leave them both with billions of dollars.
The film is reasonably good fun with some exciting set pieces and the heist scenes are thrillingly staged, however it balances a lot of the suspension of disbelief on whether or not you can buy into the two leads having a romantic connection. For me, this ruined the film, as there really didn't need to be any love interest for either character and it would have worked much better if their relationship was strictly business.
In either case, it's not entrapment, it's blackmail, as Sean Connery points out not even halfway into the film.
It isn't a bad film, but it has dated quite terribly.
5/10