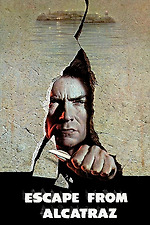 Clint Eastwood and director Don Siegel collaborate again for this 1970's prison drama and quintessential "dad movie".
Eastwood plays Frank Morris, a prisoner with a reputation for escaping, who is sentenced within the "inescapable" prison facility at Alcatraz. Immediately upon his arrival, he plots his escape, making friends and enemies amongst the jailbird population and the warden & his guards. However, the film lacks any real action set pieces or the big climax that you might expect, instead fizzling out with subtitles that explain that the prison has since closed
Unfortunately, this is a film that time hasn't been kind to, and there have been many other prison escape movies and television shows made since which trump this in all respects.
6/10

Jane Got a Gun