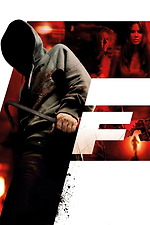 Decent low-budget British horror which centres on a group of feral youths attacking a high school and its teachers after hours.
Johannes Roberts keeps the tension building nicely throughout and delivers some nice directorial flourishes, particularly with the faceless villains, who remain hooded throughout as they do an impressive job with their parkour skills before landing their prey. The main and biggest criticism is the needlessly ambiguous ending, which is bound to infuriate the majority of audiences. A good stab at a British low budget slasher movie, but it isn't material worthy of an A* for sure.
4/10