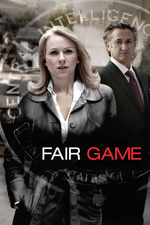 American political thrillers can be a very hit & miss genre, enjoyment may depend heavily upon which continent you live on or, indeed, your general level of interest. This one, in short, is giving a middle finger to the Bush administration and his policies on the Gulf War.
Based on a true story, it features Sean Penn & Naomi Watts as married CIA agents collecting intelligence and information on WMD in Iraq (or lack of).
Their gathered intel is then cherry picked by officials who want to justify the war and the couples names are then leaked to the press, jeopardising their future careers in their government jobs.
It's an intelligent, dramatic film with superb performances from it's two leads, helped by a very clever, controversial screenplay.
Not to be confused with the 1990's film starring Cindy Crawford.
7/10