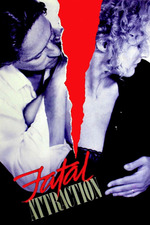 Any man contemplating a one night stand would think twice after watching this, the film which inspired the terminology "bunny boiler".
Screenwriter James Dearden adapted his own little known TV movie for one of the most iconic and successful films of the 1980's. Michael Douglas plays a married New York attorney who has a weekend of infidelity with a colleague, who, angered by his insensitive chauvinism after their tryst, becomes increasingly manic, progressing from incessant phone calls to stalking his family, even going as far as cooking the family pet in a spiteful show of revenge.
The formula has since become an overused cliche in the girlfriend/housemate/neighbour-from-hell market, but for the mid 1980's this had tremendous impact. Adrian Lyne's thriller builds the tension well from an inauspicious beginning and owes much to Glenn Close's chillingly believable performance. Credit must also go to Anne Archer, who gives life to a shamefully underwritten picket fence wife.
Definitely not a film for Valentine's Day.
8/10