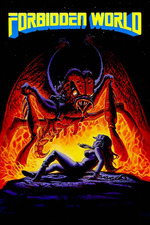 Throughout the early 1980's, producer Roger Corman tried desperately to emulate the success of 1970's sci-fi classics Star Wars & Alien with his low-budget trademark style, of which Battle Beyond The Stars is considered the best of his efforts, however, I think Forbidden World trumps them all.
It's not a good film by any stretch of the imagination, and even uses special effects footage, music and sets from the aforementioned movie, but for a piece of low-budget schlock, it's reasonably entertaining.
The film starts with a baffling space battle which seems to come out of nowhere, before the pilot docks with a medical space centre, where an experiment gone wrong has unleashed something deadly & put the crew in jeopardy. It's exactly the same plot as Alien, albeit with a creature that looks like it was knocked together in half an hour.
The female cast members walk around without any clothes on as the men plan war with the deadly creature, and though the effects are rudimentary and it's all incredibly cheesy & ridiculously silly, it makes for a nice time-killer for its mere 77 minutes.
5/10