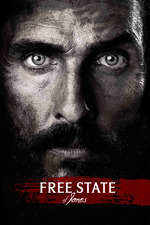 Free State Of Jones is a US civil war drama with its heart in the right place, but its approach to the material in a non-narrative style makes it a bit of a quest to become engaged in before it gets a little boring.
Inspired by the true events surrounding the life of Newton Knight, who rebelled against the confederate army and its soldiers, Matthew McConaughey does deliver a good performance in the lead, but the length of the film could have easily been trimmed to make the subject a little more bite-size and less like obvious Oscar bait.
Similar themes were explored better in Edward Zwick's 1989 war drama, Glory (qv) which comes higher recommended than this.
6/10