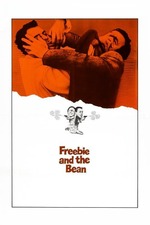 Freebie and the Bean

One of the original buddy cop movies long before it became a Hollywood standard. This film is completely bonkers, but it was amongst the first of its kind.
James Caan and Alan Arkin play the titular partnership here, and the film kicks off with them taking out the trash and investigating trashy characters as they scout the streets of San Francisco, determined to put a local crime boss behind bars.
The film gets increasingly silly as it goes on, and becomes more of a farce as it nears its conclusion.
It bares more similarities with The Blues Brothers than it does, say, The French Connection, and though it doesn't seem particularly remarkable looking back on it retrospectively, it was one-of-a-kind for 1974.
6/10