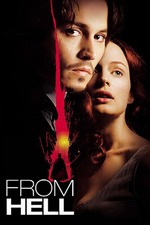 Based on a graphic novel, From Hell delivers an alternative insight into the (still) unsolved mysteries of the Jack The Ripper serial killings of Victorian London, affiliating the murderer with higher classes (which is actually a rather credible theory when all the evidence is assessed).
Johnny Depp does well as the drug-addicted, psychic police investigator attempting to get to the bottom of the killings. Unfortunately, the film is very much weakened when Heather Graham pops up as Spitalfields prostitute Mary Jane Kelly (she may be pretty, but she really can't act- or do an East London accent).
Overall, it's a decent watch, but a much better job was done in a 1988 two-part TV movie starring Michael Caine (simply called "Jack The Ripper").
6/10

From Here to Eternity

From Dusk Till Dawn