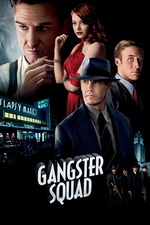 The Untouchables meets L.A. Confidential, but lacking panache in the script to make this truly memorable.
This fictionalised crime thriller pits a team of detectives out to take Los Angels mob boss Mickey Cohen down by hitting him where it hurts.
Attention to the period is given its dues, with excellent production design and costumes, but the story is a pale imitation of other, better films, even forcing in a boring romance between Ryan Gosling & Emma Stone's characters which doesn't seem to drive the story forward and doesn't really have much resolution. The most pointless thing about the film is the makeup for Sean Penn's Mickey Cohen, looking particularly amateurish for such a luxuriant production.
5/10