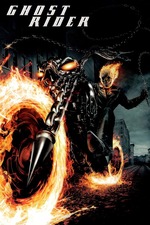 One of the more disappointing comic book films of the late 'noughties' directed by Mark Steven Johnson, who helped the likewise disappointing Daredevil to the screen.
It has to be said that Nicolas Cage is wildly miscast as the vigilante hero, stunt rider by day, ghostly spirit by night, and his performance isn't really bettered by the rest of the cast.
Not completely atrocious, but such promising material should have been a much a better film.
4/10