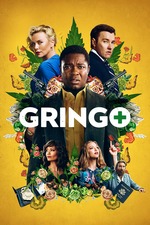 Gringo is a rather muddled attempt to emulate the style of Quentin Tarantino, pitting an American business empire against a Mexican drug cartel, with David Oyelowo as the African-American stranded between both parties.
The film opens with a telephone call to seedy businessman Richard Rusk, leading us to believe that his assistant Harold Soyinka (Oyelowo) has been kidnapped and held for ransom in Mexico. There's a set up that the company they work at is producing a new medicinal drug, utilising the vast cannabis crop south of the border. What follows is an over-convoluted affair with a lot of obnoxious, unlikeable characters. Far too many of them, in fact.
The underlying message that nice guys finish last is shoved down your throat in a very obvious way, and although David Oyelowo gives a good performance in the lead, every other character in the film are simply way too repugnant.
5/10