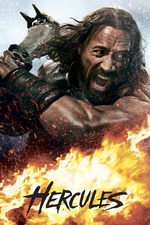 Sword & sandals nonsense starring Dwayne 'The Rock' Johnson as Hercules, though this film exists more to capitalise on the success of the fantasy TV show Game Of Thrones rather than pay tribute to Greek Mythology.
Following his twelve labours and the demise of his family, the legendary warrior is approached by a princess who convinced him to help a king protect his domain.
The rest of the plot we've seen long before and since as it follows a colour-by-numbers narrative with hardly anything to set it aside from the rest.
It goes without saying that Johnson is woefully miscast, looking incredibly stupid with his long locks and bronzed complexion, but this really isn't a film to judge performances.
Another Herculean film was released the same year (The Legend of Hercules) and this is deemed to be better of the two.
4/10

Alvin and the Chipmunks