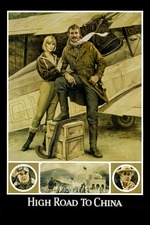 Tom Selleck, the original choice to play Indiana Jones in Raiders Of The Lost Ark (qv), had to drop out due to his commitments to the television series Magnum, P.I.
All was not lost though, and two years later he appeared as the lead in this Indiana Jones knock-off, where he plays an alcoholic pilot who assists in transporting a spoiled socialite to China so she can warn her father about a possible conspiracy to have him murdered.
Considering the other Indiana Jones ripoffs which emerged following the success of Raiders Of The Lost Ark, this is nowhere near as abysmal as some, but still has nothing to stand out in originality, story, performances and dialogue.
5/10