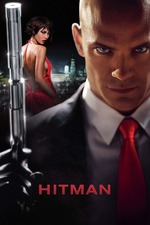 Based on a video game, and it shows.
Timothy Olyphant looks the part as the titular hitman, a genetically manufactured, emotionless assassin who becomes embroiled in a conspiracy involving a Russian politician.
Unfortunately, the script gives the actor nothing really to do except go from scene-to-scene with the same expressionless look on his face, before culminating in a multiple-gun stand off, which is probably the only part of the film worth watching.
The game is much more fun.
4/10